Koh Rong Samloem, also spelt Sanloem and Saloem, is situated abo ut 18 kilometres west of    Sihanoukville in the Gulf of Thailand and is reachable in about forty-five minutes by fast

ferry or about two hours using one of the slower converted fishing boats depending on the conditions.

The island is a peaceful getaway destination which is much more tranquil and also is developing island. The clean beaches of Koh Rong Samloem suffer less of the noise and light pollution that has become a problem on the larger island due to its all-night bars and party crowd dancing through the night especially on full moon nights

Koh Rong Samloem measures approximately 9 kilometres long and 5 kilometres at its widest point. One of its best bays is Saracen Bay which connects through a jungle that leads to a long beach stretch; the jungle sits in the middle of two beaches whose distance from the sunrise-side of the island to the sunset-side of the island is a little more than a kilometer walk through between two b 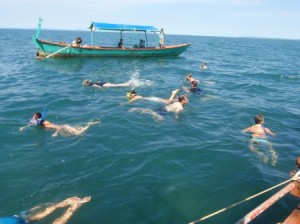 eaches.  Boats can be hired for trips around the island to visit the different beaches.

Kos Rong is the second largest island of Cambodia, located in Preah Sihanouk Province about 25 kilometers off coast in the Gulf of Thailand. The island’s area is  approximately 78 km2. Currently, there are four small villages and also a home to more than a dozen guesthouses and Bungalows. Many of Bungalows are owned 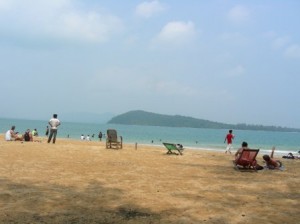 by foreigners. Koh Rong has had a land concession granted by the Cambodian government. The Royal Group has been granted a 99-year lease term and has plans to build “Asia’s First Environmentally Resort Island. In mid-2015, the French “Survivor” television program Koh Lanta was filmed on  Soksan village, Koh Rong Island. Finally development in Koh Rong Island is coming! Now the island is provided with trails or routes that can connects the island to different beaches, so you can also ride with motorbike or bicycle. However one must be careful as roads are still rough; though this is a good news for the island. Most visitors who have visited there shared their worth while experiences: a wonderful place with clear blue water, calm fresh air, a trek in the jungle, fishing, etc.

Koh Ta Kiev is one of the closest islands to Sihanoukville and is in the itinerary of the many day trips and island tours that leave from the beach town. Few people stay overnight in the island;  if only guests stay longer, it could be one of the nicest places to tour; given the beautiful beach, plus a few smaller island

s with nice beaches are accessible from Koh Ta Kiev.

Koh Ta Kiev has been contracted to a foreign company; a French outfit who has already been granted with an earlier contract of 99-years to half of Koh Russei (another Island) and parts of Ream National Park. They have ambitious plans for high-end resorts and boutique luxury hotels; but so far there’s little sign of development since the movement of construction has not progressed yet since its groundbreaking. 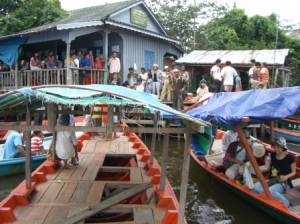 se Malaysian firm who, according to media reports, plan to spend US$2-3 billion dollars “to develop” the island. There are several Islands around it and it looks nice, especially for visitors who wants to sit around- enjoy the fresh air, listen to the sound of the waves and be captivated by the sun rise and sun set. 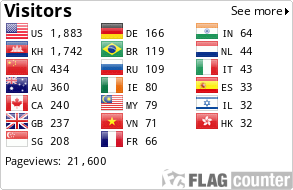